We are proud to announce our film has been accepted to the 9th annual Charleston International Film Festival. The Gullah Project will screen Saturday, November 5th in the 2 PM block of short films at Charleston Music Hall.

It’s an honor to be invited to such a prestigious festival. We hope many of the stars of the film will be able to join us. St. Helena Island is 45 miles down the coastline, but it’s a 78 mile trip by car.

To find a complete list of screenings for this documentary film please visit the Screenings section of our webpage.

Profiles of the Gullah: Brandon and Jordan Johnson from Denise McGill on Vimeo.

Siblings Brandon, left, and Jordan Johnson have lived on St. Helena Island their whole lives. Each year they work to raise collards, sweet potatoes and sugar cane with their grandfather, Ben Johnson Jr. Then the whole family helps to sell the produce at Heritage Days Celebration in November, and they all share the profits.

I’m expanding my knowledge base by finding films and books about Gullah culture that I’ve previously missed. I’ll share some of them as I make my way through. Many thanks to Amy Shumaker @shu2833, executive producer at #SCETV, for providing links to some of these hard-to-find programs!

Recently I saw Family Across the Sea, a 57-minute documentary film by Tim Carrier that originally ran on South Carolina public television (SCETV) in 1990. Carrier follows a group of Gullah people from the United States as they travel to Sierra Leone to visit the lands of their ancestors. It’s a moving story with some surprising connections between the two cultures.

The film explores the similarities in geography, culture and language between the Sea Islands of the United States and the west coast of Sierra Leone, Africa. The first connections were discovered by Lorenzo Dow Turner, an African-American linguist who made  hundreds of recordings of Gullah speakers and songs in the 1930s. He discovered some of the exact same songs in Sierra Leone.

Gullah delegation experiences highs and lows on their trip. The most  painful event is the visit to Bunce Island, where most of their ancestors were loaded onto boats for America. Another moving scene is an interview with villagers in Sierra Leone. They knew many of their people were kidnapped years ago, but never knew what became of them. The high point is easily the reunion between the Americans and the villagers, who welcome them as long lost relatives.

The plot moves back to South Carolina where Joseph Momoh, President of Sierra Leone, visits the Penn Center in 1988. His visit solidifies recognition of the ties between Gullah and Sierra Leone cultures. As a result Gullah speakers, often ridiculed for their “uneducated” dialect, have a new pride in their heritage. Their language becomes an important link to their motherland that is worthy of preservation and academic study. That pride continues to this day, where Gullah continues to gain appreciation as a rare piece of the American experience.

Our team created a seven-minute overview of The Gullah Project to mark our progress. We entered the overview into film festivals as a short documentary. We are excited to report that out of nine entries, The Gullah Project overview was accepted into five festivals. It screened in five cities this spring.

The screenings have raised awareness about Gullah culture for audiences all over North America. There is little knowledge of Gullah history outside of the Southeast United States. At Toronto’s Female Eye Film Festival, few people in the international community had ever heard of the Gullah. Festivals hold a Q&A after each screening so viewers can learn how the film was made. Director/Producer Denise McGill was able to attend four of the festivals.

Film festivals are valuable because they provide feedback. Just to be accepted at so many venues is a very positive sign. Met professionals in the industry who take an interest in our project, offer good advice about further contacts, possible team members, next steps and distribution. Share ideas with other filmmakers and bond. Learn from their previous mistakes and successes. Spread the word about Gullah history and St. Helena Island. Learned what elements of our film are most engaging to the audience. How the film industry works. Set realistic goals. Join network of filmmakers with similar passion and causes.

Currently working on one-hour film with the goal of airing on public television. Since getting feedback, our team has made changes to the script, and continue editing. Nearly all the filming and field work is complete. Now we are fundraising. Funds will allow us to add major talent to our team, top professionals who can polish the visuals, audio, graphics, and soundtrack for the film.

Unfortunately, the overview is not available for the public online while it is at festivals. We’ll let you know when there is a way to see it. 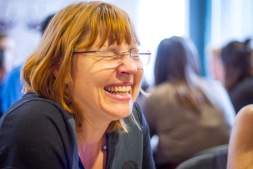 A candid moment with Director/Producer Denise McGill discussing the festival with fellow attendees.

Twins Jameah and Jamyah Moore have lived on St. Helena Island their entire young lives. Their community involvement began when they started volunteering at Sara’ Reynolds Green’s Marshview Community Organic Farm at age 9. At Penn Center Heritage Days Festival in 2014, they performed in the Road of Remembrance play about the history of St. Helena Island. The Gullah Project interviewed them during a rehearsal break. At the time, the twins were in seventh grade at Lady’s Island Middle School.